Skip to content
About Postcards
Buildings of the former manor of A. Trehubov 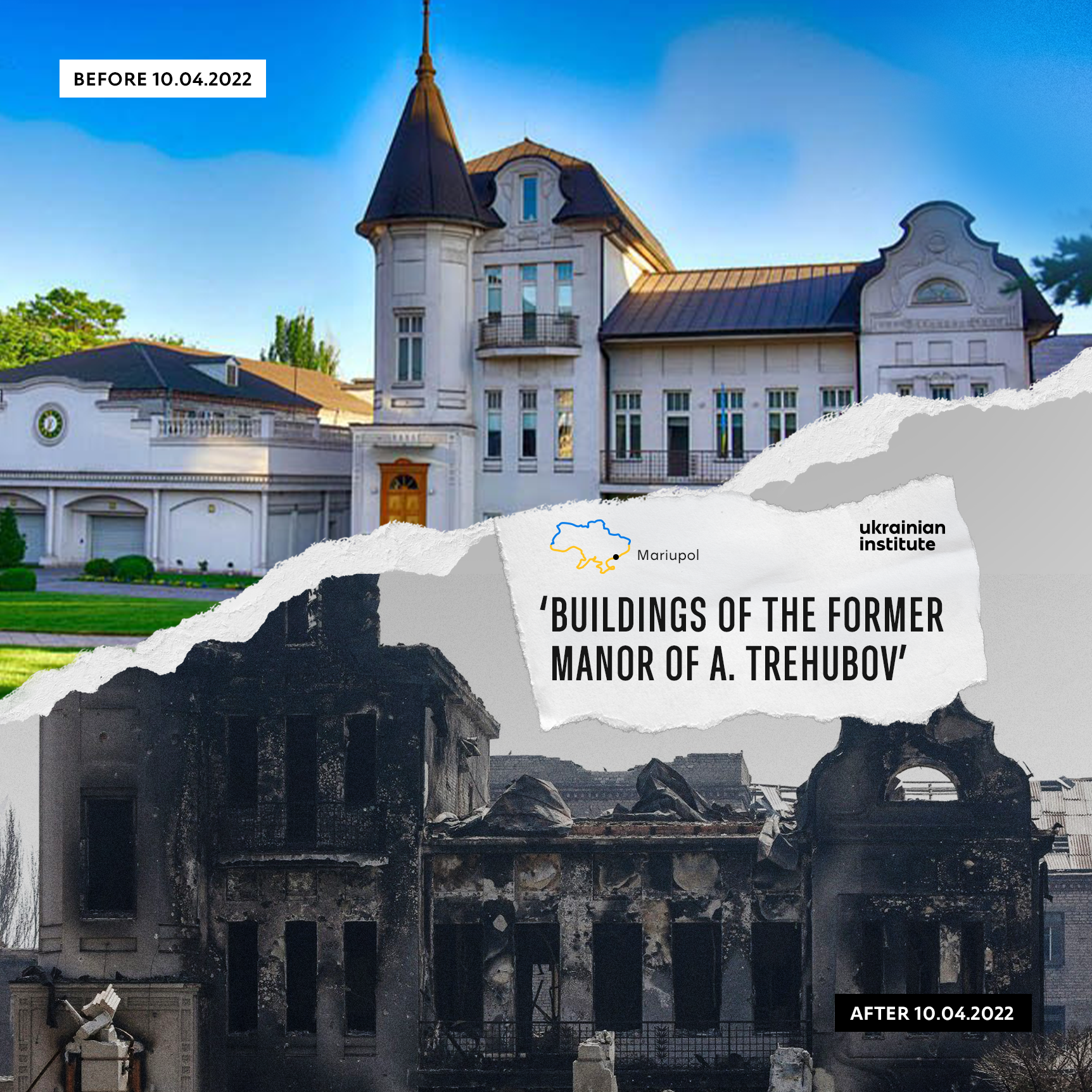 Mariupol, Donetsk region Buildings of the former manor of A. Trehubov

Historical buildings reflecting the Mariupol architecture of the late XIX and early XX centuries before the Bolshevik Revolution. 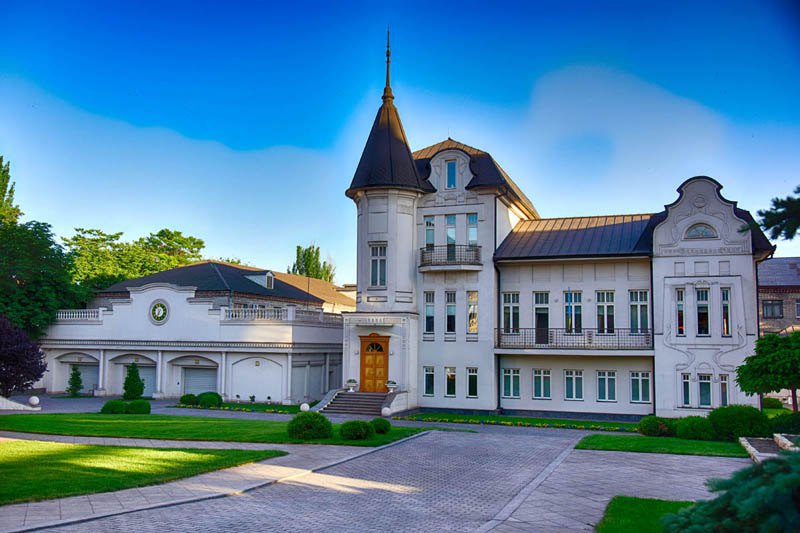 For decades, Mariupol was known in Ukraine and worldwide as a centre of the metallurgical industry. Since the start of Russia’s invasion of the Donetsk and Luhansk regions in 2014, it has become a widely known front-line city.
However, the history of Mariupol has many different pages. Before the Bolshevik Revolution of 1917, the city was full of the hustle and bustle of market squares, winding cobbled streets, and elegant estates of local entrepreneurs. The former manor of Abram Trehubov is a reminder of the time when the city didn’t yet have a distinct industrial image.
Trehubov was one of the 38 members of the City Duma, a prominent public figure and a merchant of the first guild, who had the right to trade abroad. At the turn of the 20th century, he owned luxurious real estate, several enterprises, including a steam mill, and three telephones, a rarity at that time. In addition, Trehubov was the secretary of the Association for Helping Pupils of the Mariupol Oleksandrivska Male Gymnasium, an active philanthropist and patron. His possessions in the centre of Mariupol included a two-storey estate and a number of buildings in the backyard. Among these, a house with a peaked tower stood out, which survived to this day and was restored in 2012.
When the Bolsheviks seized power in Ukraine, they confiscated all the property of Abram Trehubov. The businessman’s estate housed the headquarters of the All-Russian Extraordinary Commission or Cheka (ruthless Bolshevik secret police). This organisation was known for its mass arrests, imprisonment, torture, and massacres of all dissidents and political opponents without any trial. The buildings that used to beautify the central city square began to evoke horror.
Following the Second World War, the former Trehubov’s estate became the property of the Ministry of Healthcare. A city polyclinic and a blood transfusion station were established here. Only after the restoration of Ukraine’s independence was the manor reconstructed, and it took almost 10 years. As a result, the original design of these houses was restored, and they became an adornment of the central part of Mariupol.
And on February 24, 2022, Ukraine experienced a full-scale Russian invasion. The shelling of Russian forces damaged the facades, windows, roofs, and interiors of three historical buildings of the Trehubov estate and caused a severe fire, too.
The site that once held memories of the past for many years may now turn into a memory itself. 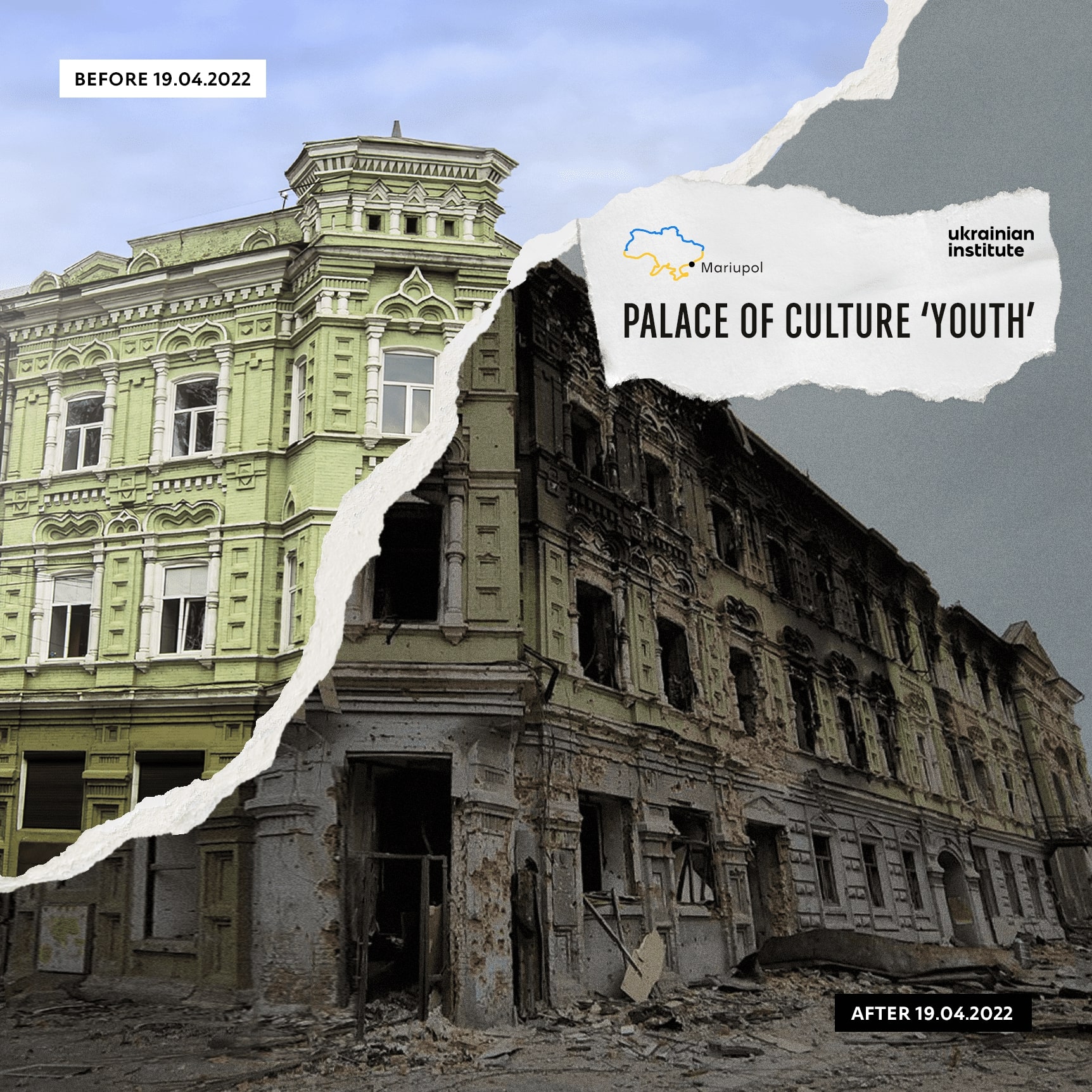 Formerly Palace of Culture of the Azovstal plant. The building of the former Continental hotel (1887–1910). 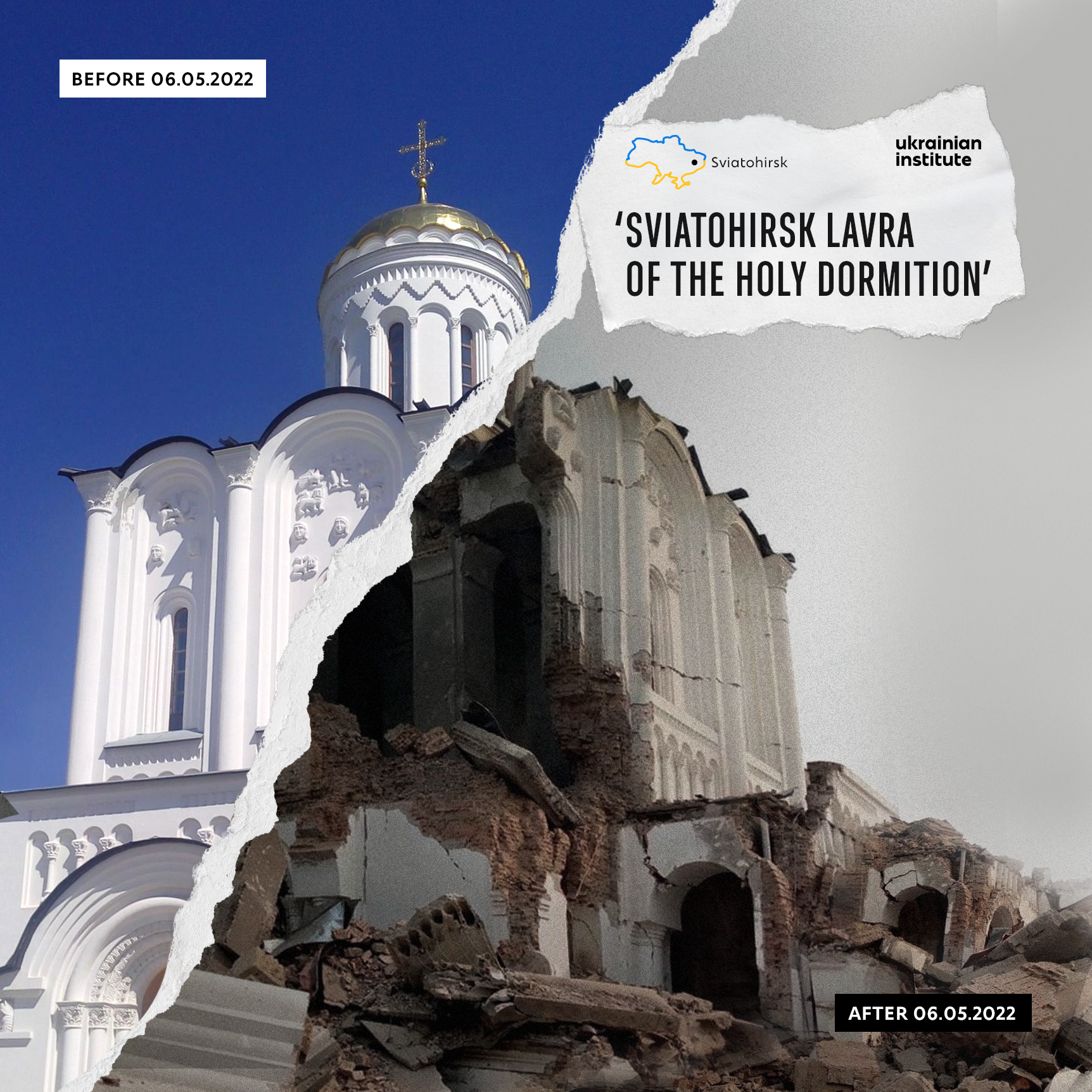 A unique monastery complex of the XVI–XIX centuries with natural caves. Donbas Arena is the home stadium of the Ukrainian ‘Shakhtar’ football club, which became the first of the ‘elite’ category in Ukraine and in all of Eastern Europe. 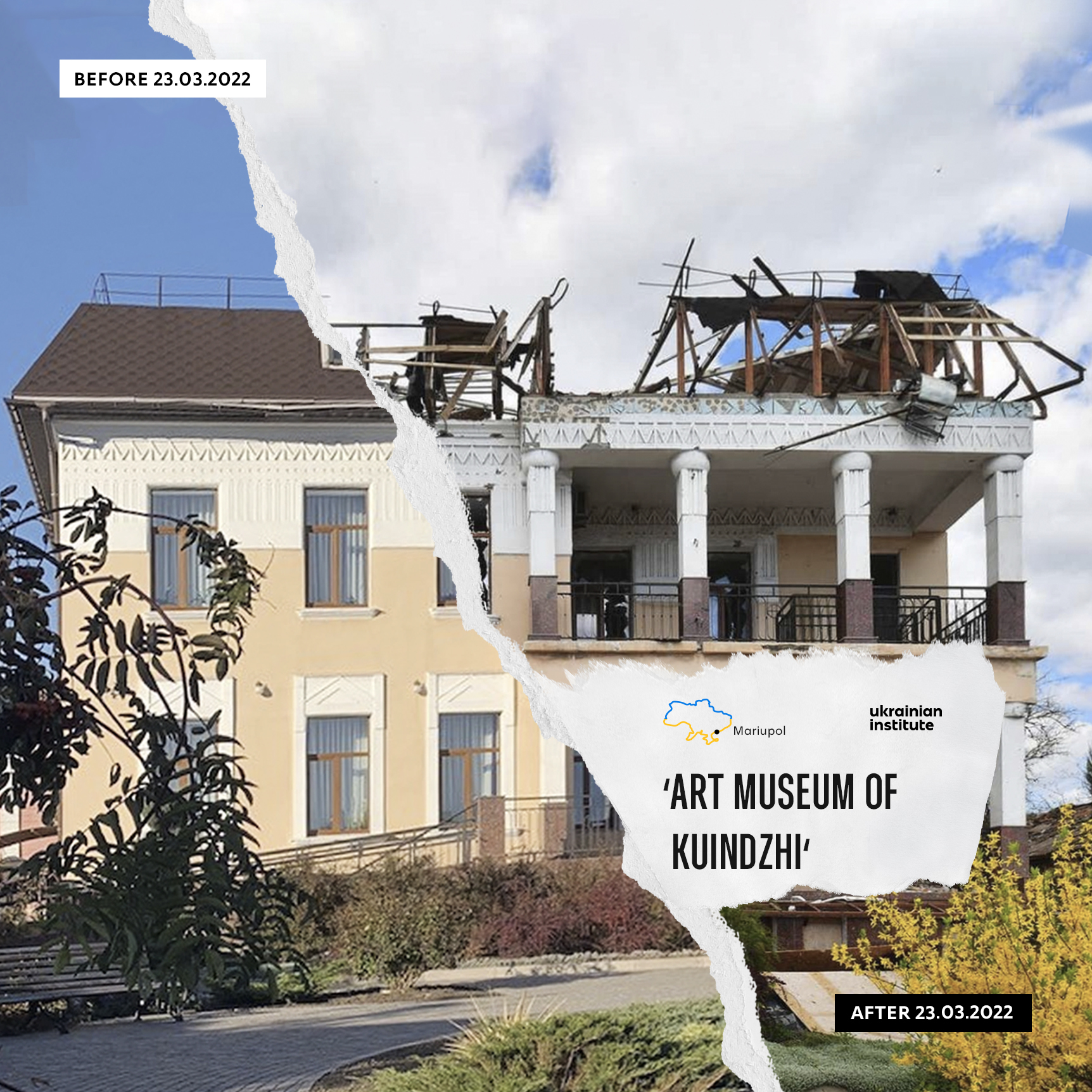 An ancient building of 1902 in the Northern Art Nouveau style, which comprised under its roof the works by respected Ukrainian landscape painters, as well as world-famous marine and realist artists. 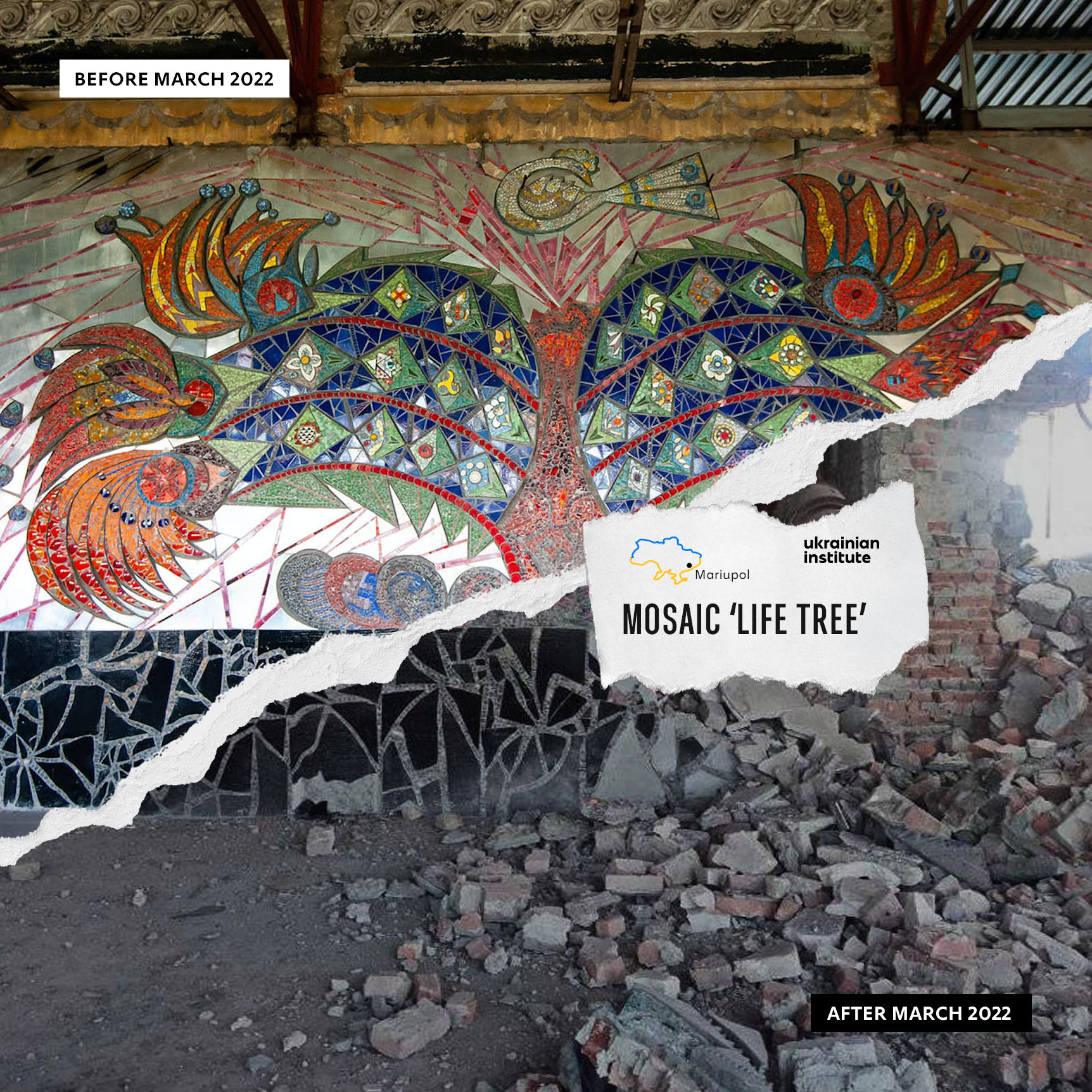 Invaluable monumental artworks, created by a group of Ukrainian monumentalists led by Alla Horska, a dissident artist and one of the Sixtiers movement’s founders. These panels incorporated elements of Ukrainian folk tradition, contemporary world trends, and Soviet art. Formerly prospering trade and then a metallurgical centre of Ukraine that has become the symbol of the bloody Russian invasion of Ukraine and the genocide committed by the Russian army and government. 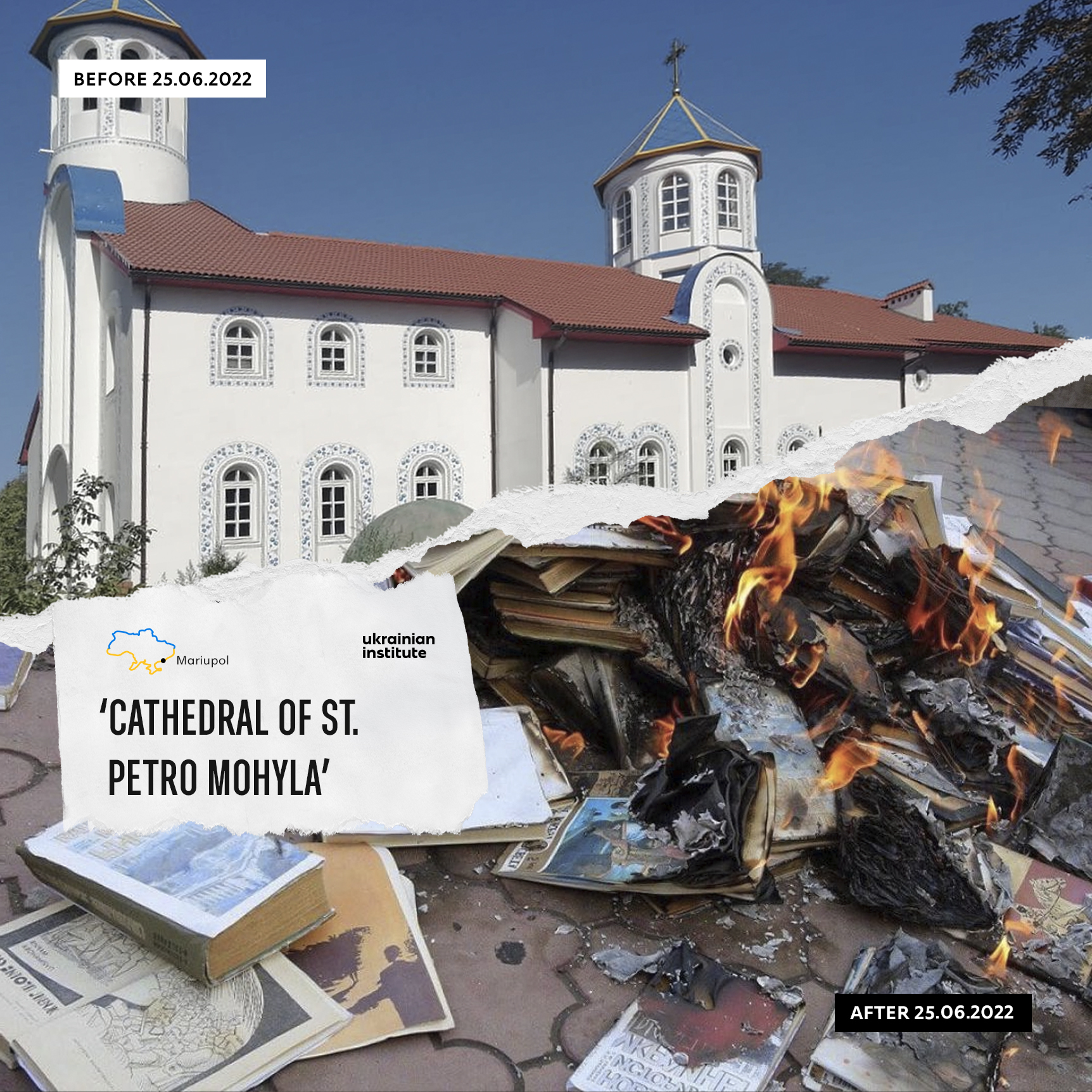 The only church in the world entirely decorated with Petrykivka paintings, an ancient style of folk Ukrainian decorative painting included in the UNESCO intangible cultural heritage. The museum was established at the Faculty of History of Mariupol State University. It has become an important cultural and educational site bringing together students, professors, and citizens around the native land’s history. The manor of Mariupol City Council’s mayor, having more than 150 years of history behind. Its architecture incorporated elements of the Stalinist Empire, Neoclassicism, and Baroque. 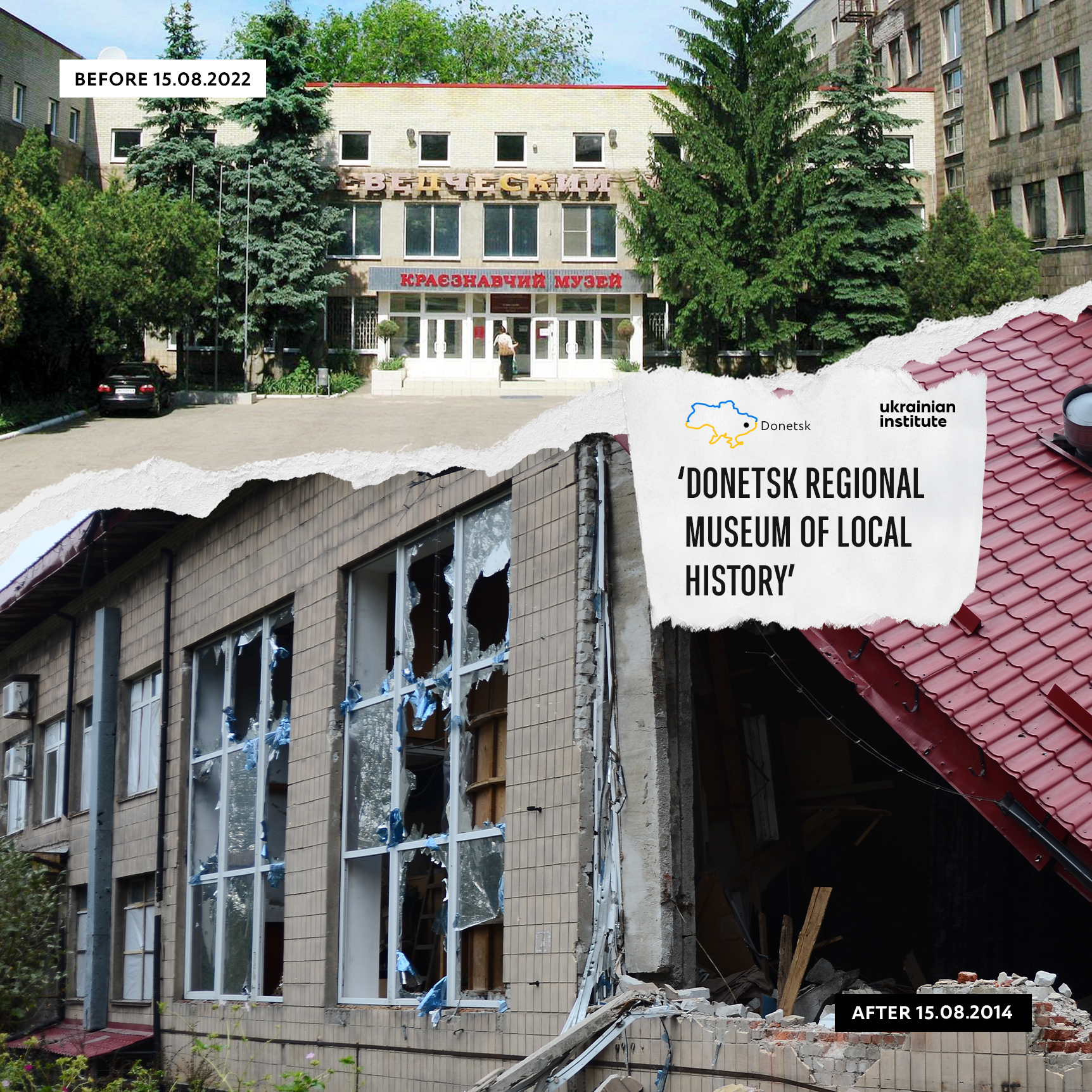 One of the oldest and largest Ukrainian museums, which collection comprised over 180 thousand exhibits, including the monuments and artefacts of world importance. 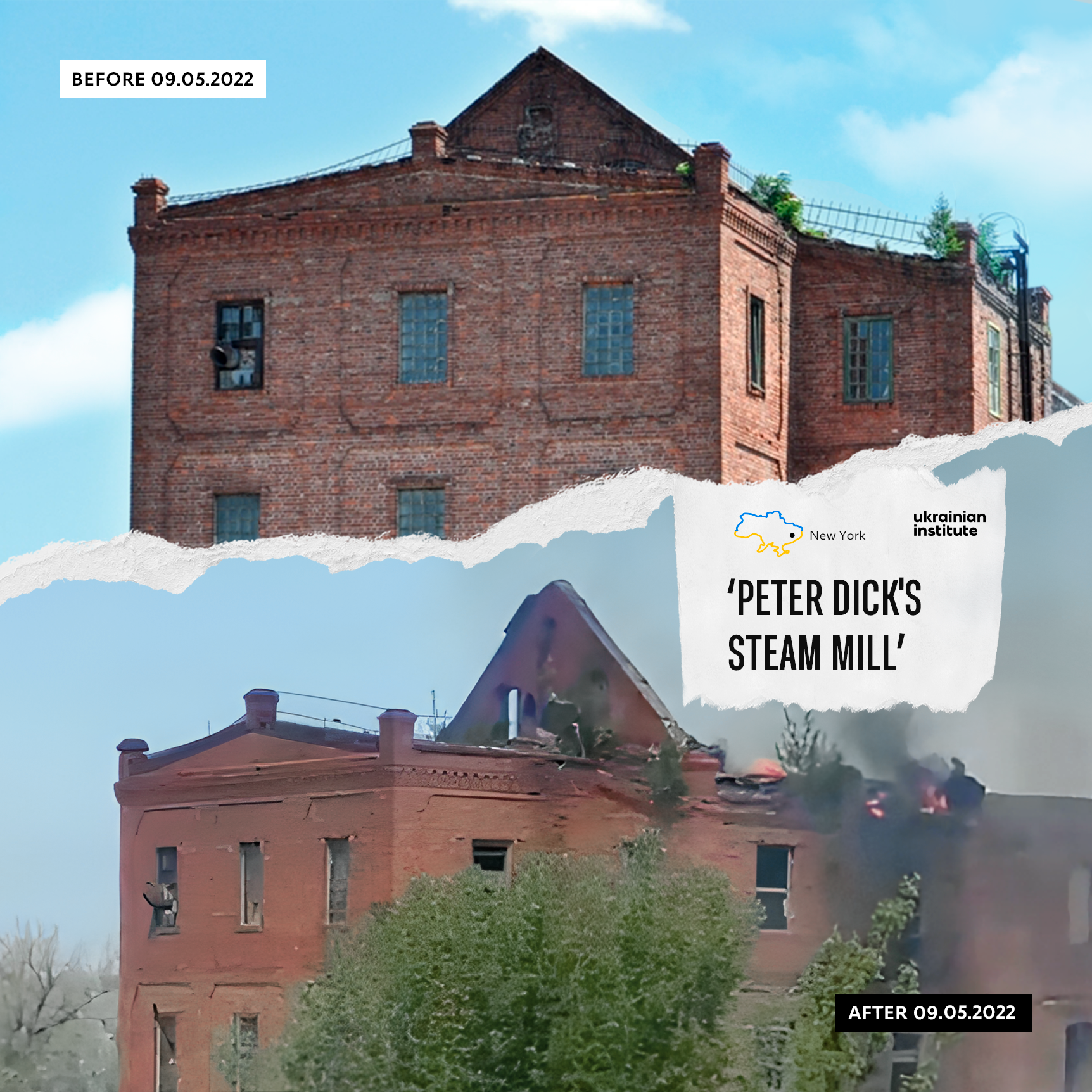 One of the biggest steam mills in the German Mennonite colony that existed in the Donetsk region at the turn of the 20th century. Built in 1903, this mill had been feeding people of New York and all of its suburbs for decades. Bohorodychne, Donetsk region Church of the Holy Mother of God ‘Joy of All Who Sorrow’

The central church of the Sviatohirsk Lavra’s convent, erected in the neoclassical style with baroque elements in 2005 in the site of a stone church of 19th century dismantled by the Bolsheviks. The house was built in the constructivist style in 1929. It has been the centre of the city’s creative life for almost a hundred years. 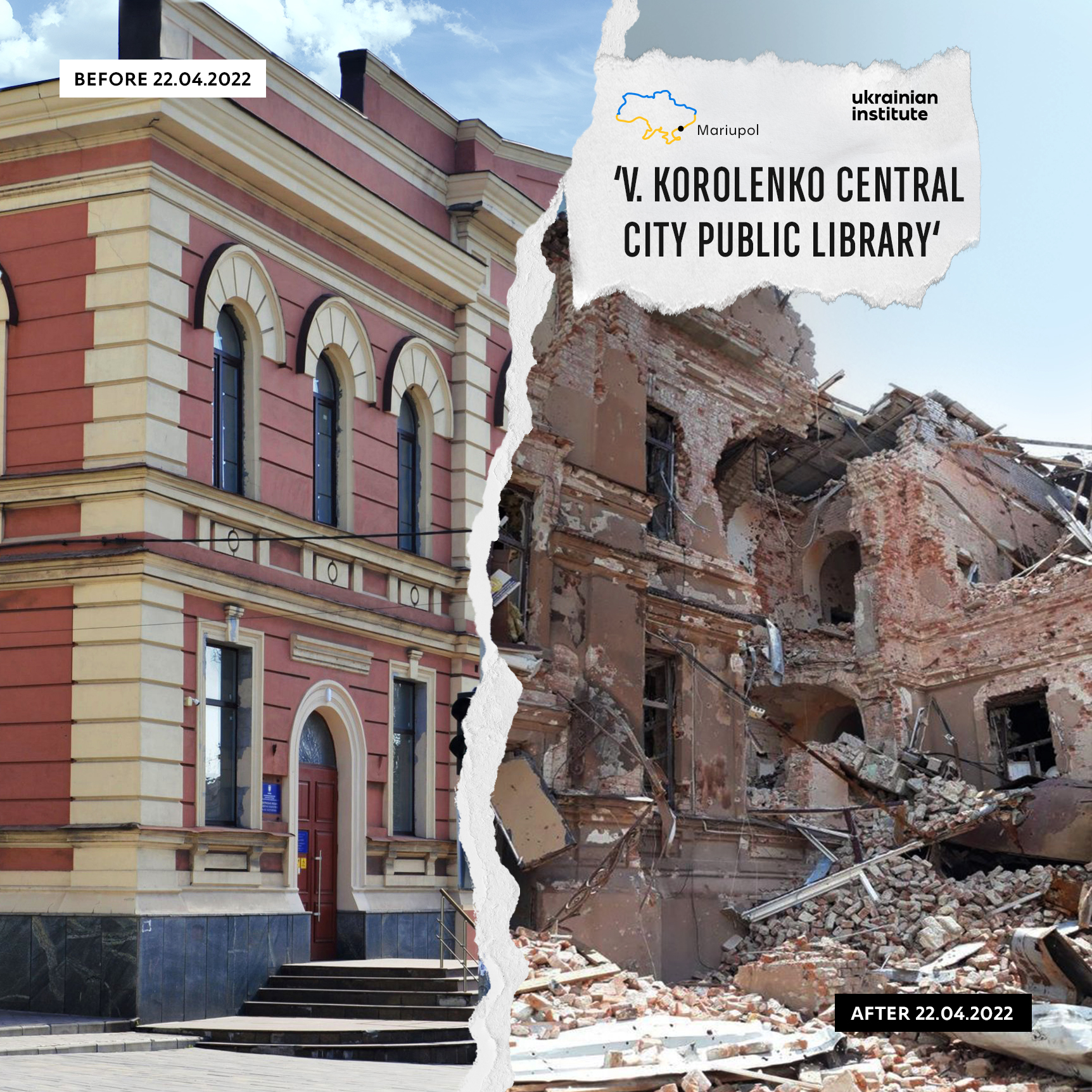 Former State Bank’s building, constructed at the turn of the 20th century. In 2019, this site housed the city library, which history began back in 1904. An intellectual and educational centre of the city. 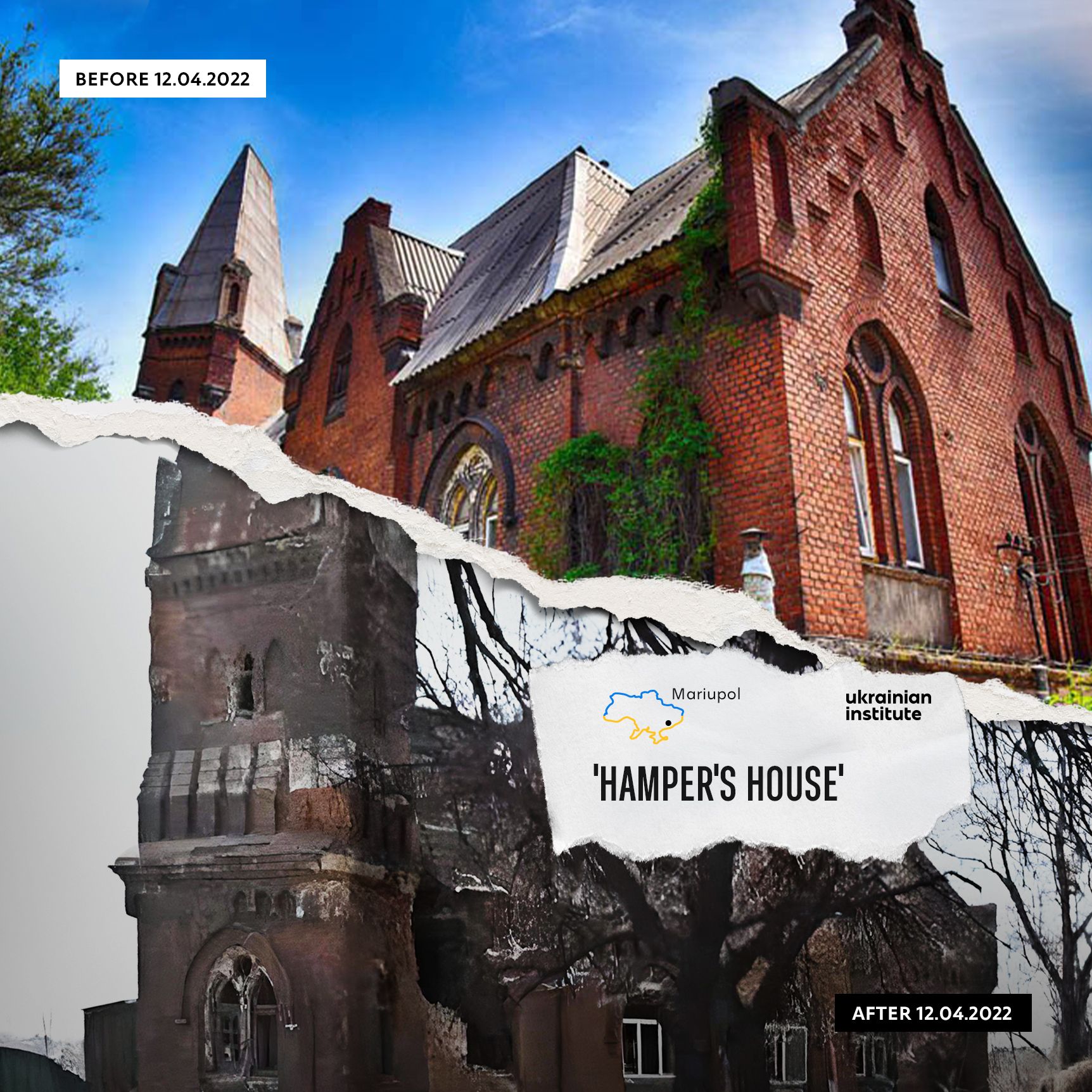 A two-storey manor in the classical style with a neo-Gothic tower, built in Mariupol 125 years ago. The state was a property of respected doctors. 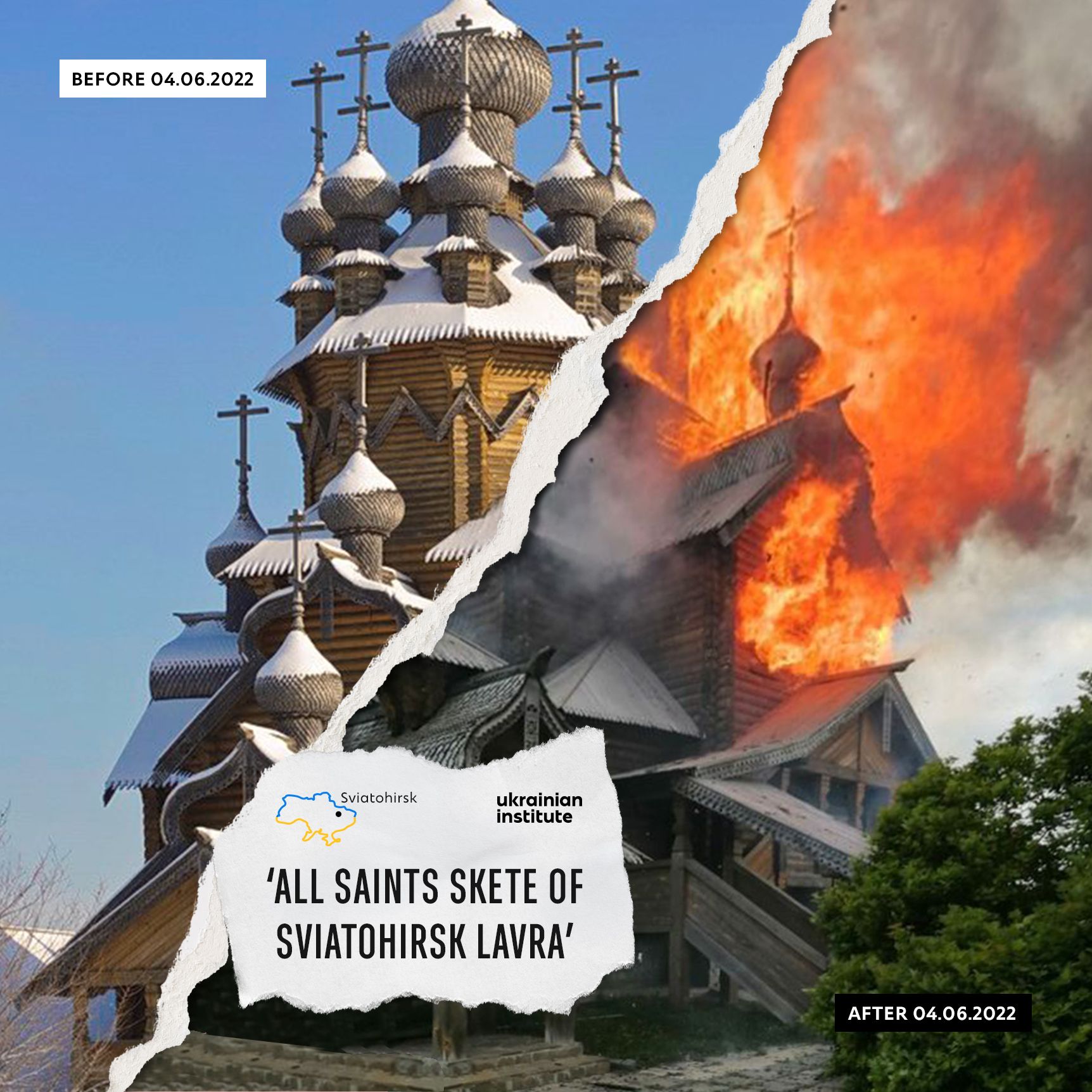 Part of the Sviatohirsk Lavra. All the skete’s buildings are made of massive pine trunks. The All Saints Church, the main skete’s sanctuary, used to be the biggest wooden church in Ukraine. 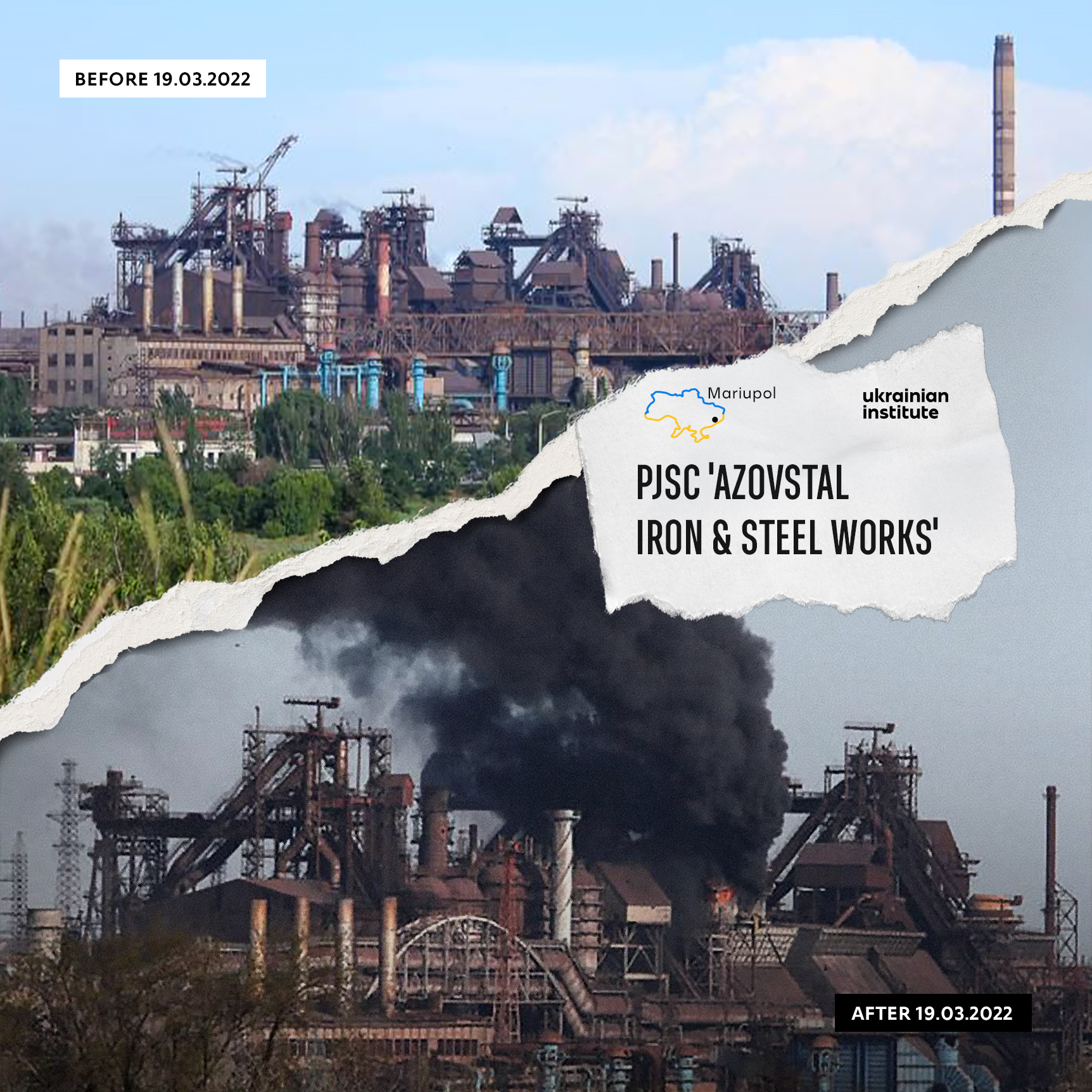 The Azovstal plant in Mariupol was one of the largest iron and steel producers in Europe. In 2022 it became a symbol of resistance to brutal Russian aggression and the incredible courage of Ukrainian fighters. 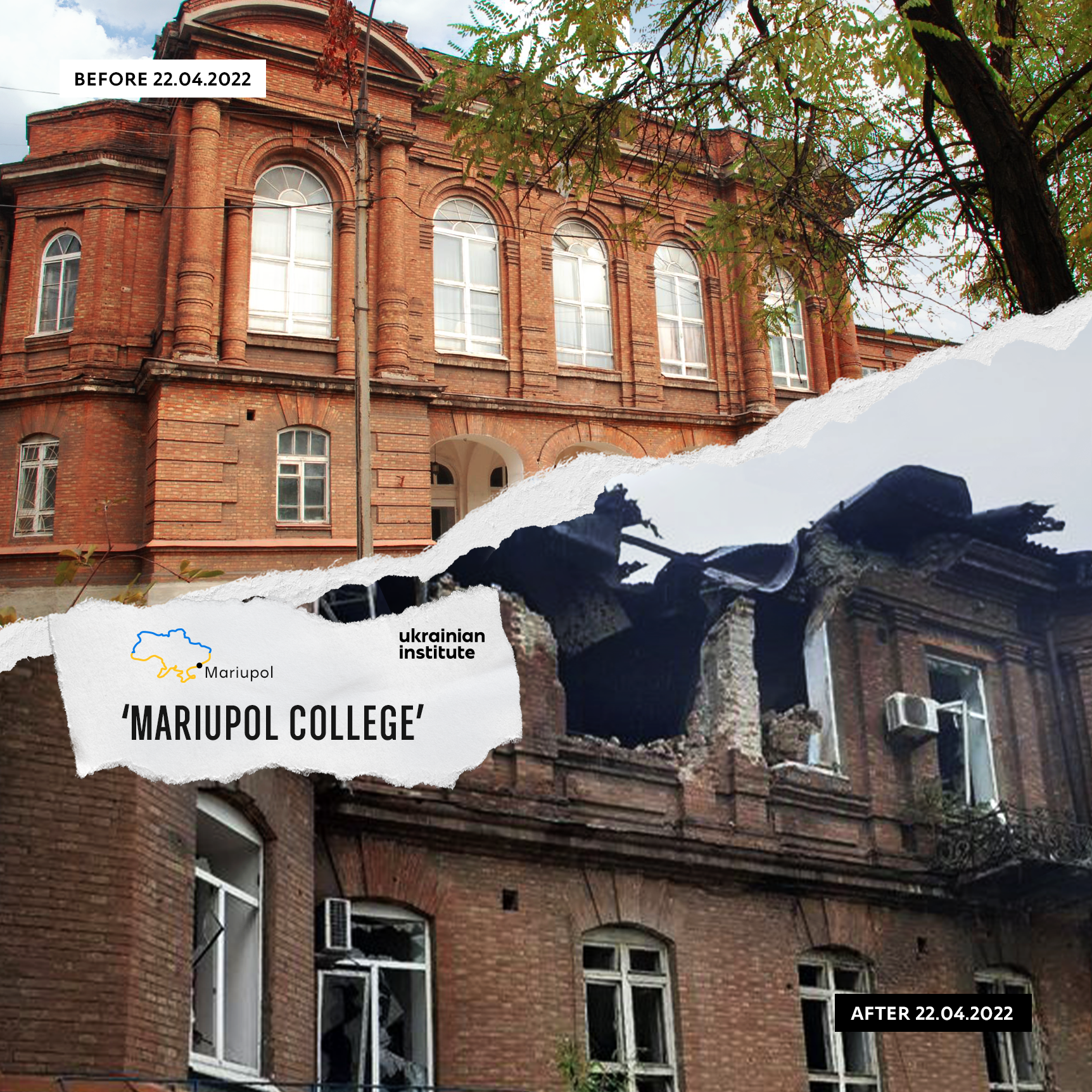 Educational institution with more than 140 years of history where many generations of Mariupol citizens studied. 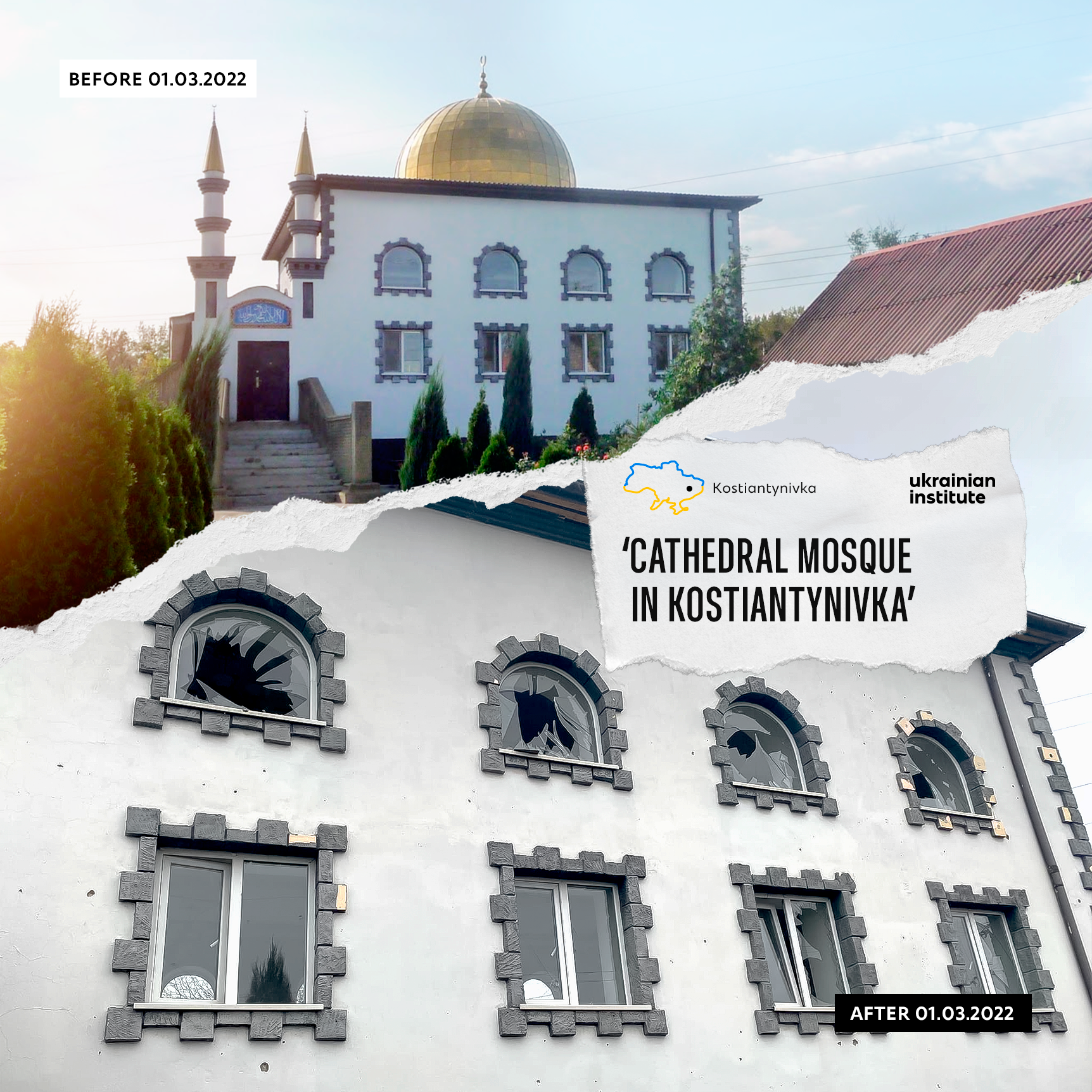 Center of spiritual life of Muslims of Donetsk region. Two buildings are a monument to an entire era. They were the last buildings in Mariupol designed in the Stalinist Neoclassicism style. 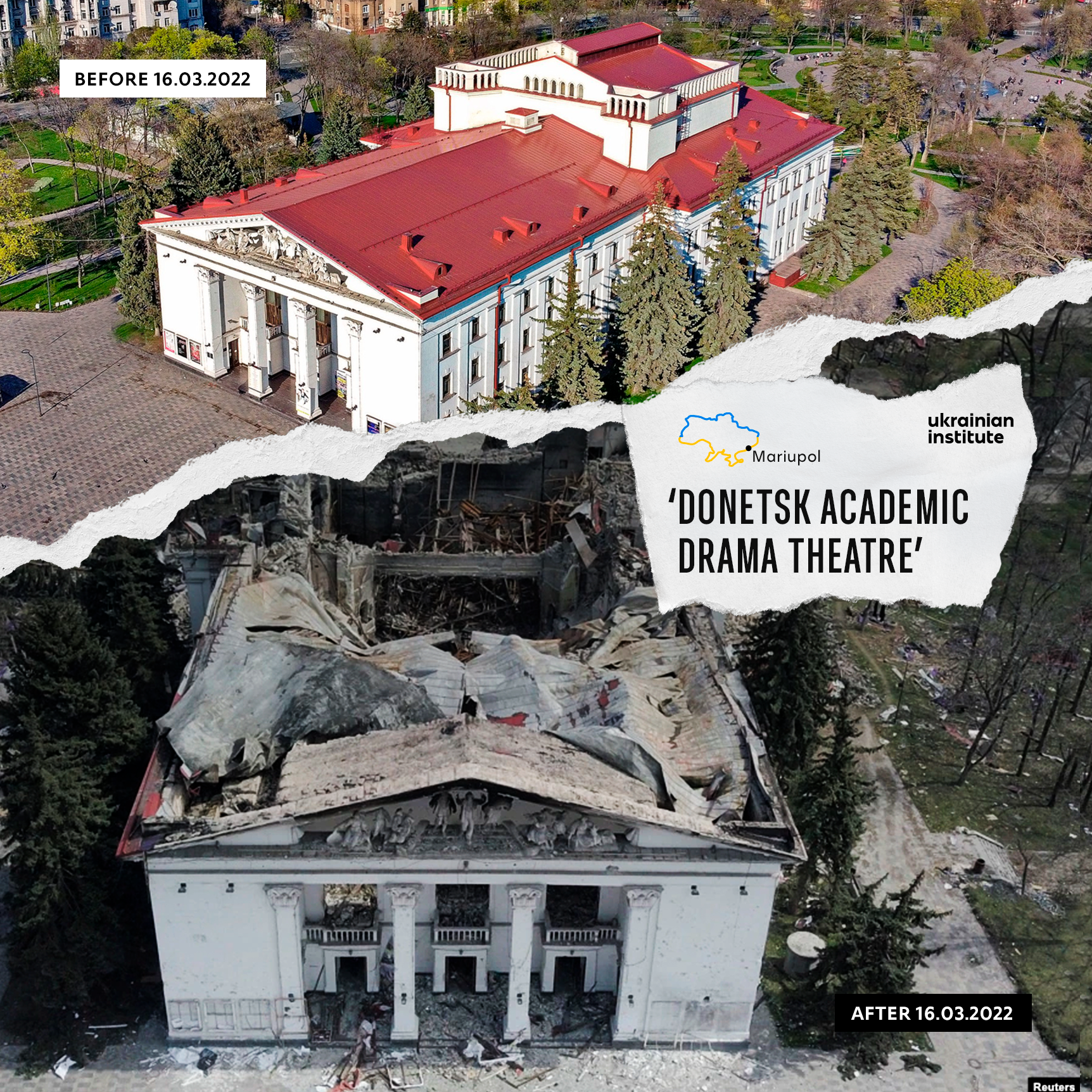 One of the oldest theatres in the Left-bank Ukraine. 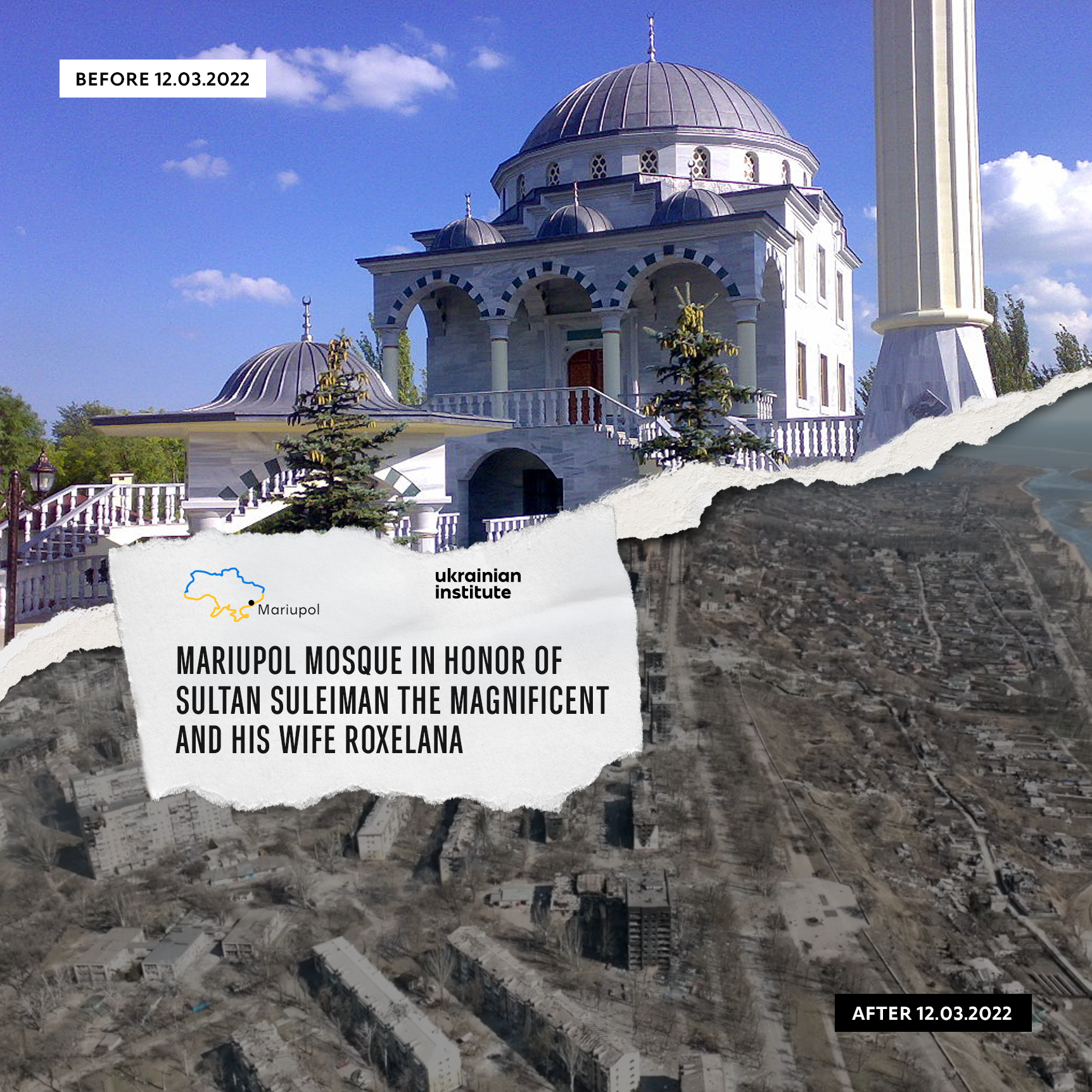 Mariupol, Donetsk region Mariupol Mosque in honor of Sultan Suleiman the Magnificent and his wife Roxelana 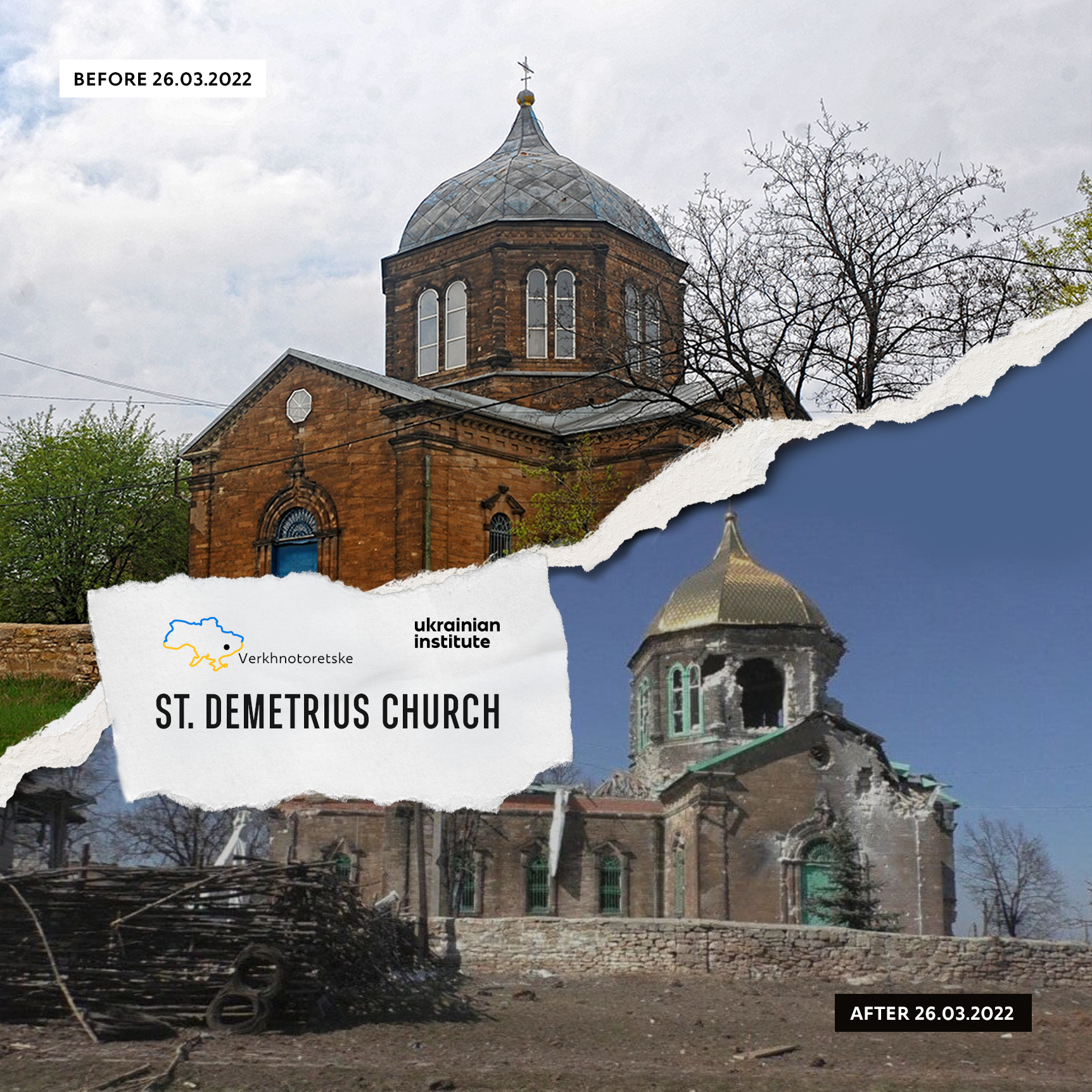 St. Demetrius Church dedicated to the holy martyr Demetrius of Thessaloniki is one of the oldest in the region.