This award is given to translators who translate from Ukrainian into other languages. The Prize was launched in 2020 by the Ukrainian Institute, PEN Ukraine, and the Ukrainian Book Institute.

The Objective of the Prize

The Prize aims to support and acknowledge the enlightening work of those who translate from Ukrainian into other languages, who bring Ukrainian literature to the world and thus draw the world’s attention to Ukraine through the works of Ukrainian authors.

This Prize is awarded for

– excellence in translation, and

– contribution to the promotion of Ukrainian literature abroad.

Appointed jury members may not serve for more than three consecutive years at a time.

Jury members have the right to consult with experts (such as translators, linguists, literary scholars, and diplomats) in the process of their deliberations.

About the Drahomán Prize for 2022 in more detail

The long list of nominees for the 2022 Drahomán Prize

The long list of nominees for the 2022 Drahomán Prize could be found here.

The laureate receives a statuette created by the Ukrainian artists Anna Zvyagintseva and a 3,000 EUR prize (taxes included), as well as additional opportunities for professional growth and promotion of works.

Open Call for the 2022 Drahomán Prize

To submit, please read the conditions of the Prize.

The submission includes a filled-out submission form as well as electronic and hard copies of the nominated book in Ukrainian and in the language of translation. Submissions for 2022 will be accepted from October 24 to December 10.

The long list of nominees for the 2022 Drahomán Prize will be announced no later than December 15. The name of the laureate will be announced in spring during the award ceremony in Ukraine. The laureate receives a statuette created by the Ukrainian artists Anna Zvyagintseva and a 3,000 EUR prize (taxes included), as well as additional opportunities for professional growth and promotion of works.

About the Drahomán Prize for 2021 in more detail

Polish translator Bohdan Zadura received a statuette made by Ukrainian sculptor Anna Zvyagintseva, and a honorarium of 3 000 euros.

The laureate of the 2021 Drahomán Prize

Polish translator Bohdan Zadura became the laureate of the 2021 Drahomán Prize for translators from Ukrainian into world languages.

Bohdan Zadura is a translator from Ukrainian into Polish, writer and literary critic. The author of twenty-five books of poetry and more than a dozen volumes of essays and prose. Long-term editor of “Akcent” quarterly, since 2004 – editor-in-chief of “Twórczość” monthly. Nominated for the award with translations into Polish of Kateryna Babkina’s “My Grandfather Danced the Best” (Warsztaty Kultury publishing house), Vasyl Makhno’s “Eternal Calendar” (Państwowy Instytut Wydawniczy publishing house) and Yuri Vynnychuk’s “Lutencia” (Warstwy publishing house).

"Receiving this award is a great joy for me, I am very grateful. First of all, I would like to thank all poets and novelists from Ukraine, without whose works I would not have received this award. I thank Polish publishers who are interested in Ukrainian literature. I am grateful to my son, who was the first reader of my translations, and now he himself translates Ukrainian literature,"

Special Award of the Chapter

As part of the ceremony, the Special Award of the Chapter “for the filigree translation of the classics of Ukrainian literary modernism and contribution to the promotion of Ukrainian literature in Europe” was also presented. It was awarded to Tobias Wals, a Ukrainian-to-Dutch translator who was nominated by Pegasus Publishers for his translation of the book by the Ukrainian writer Mike Johansen “Dr. Leonardo’s Journey to Sloboda Switzerland with his Future Lover, the Beautiful Alcesta”.

About the finalists of the Prize: 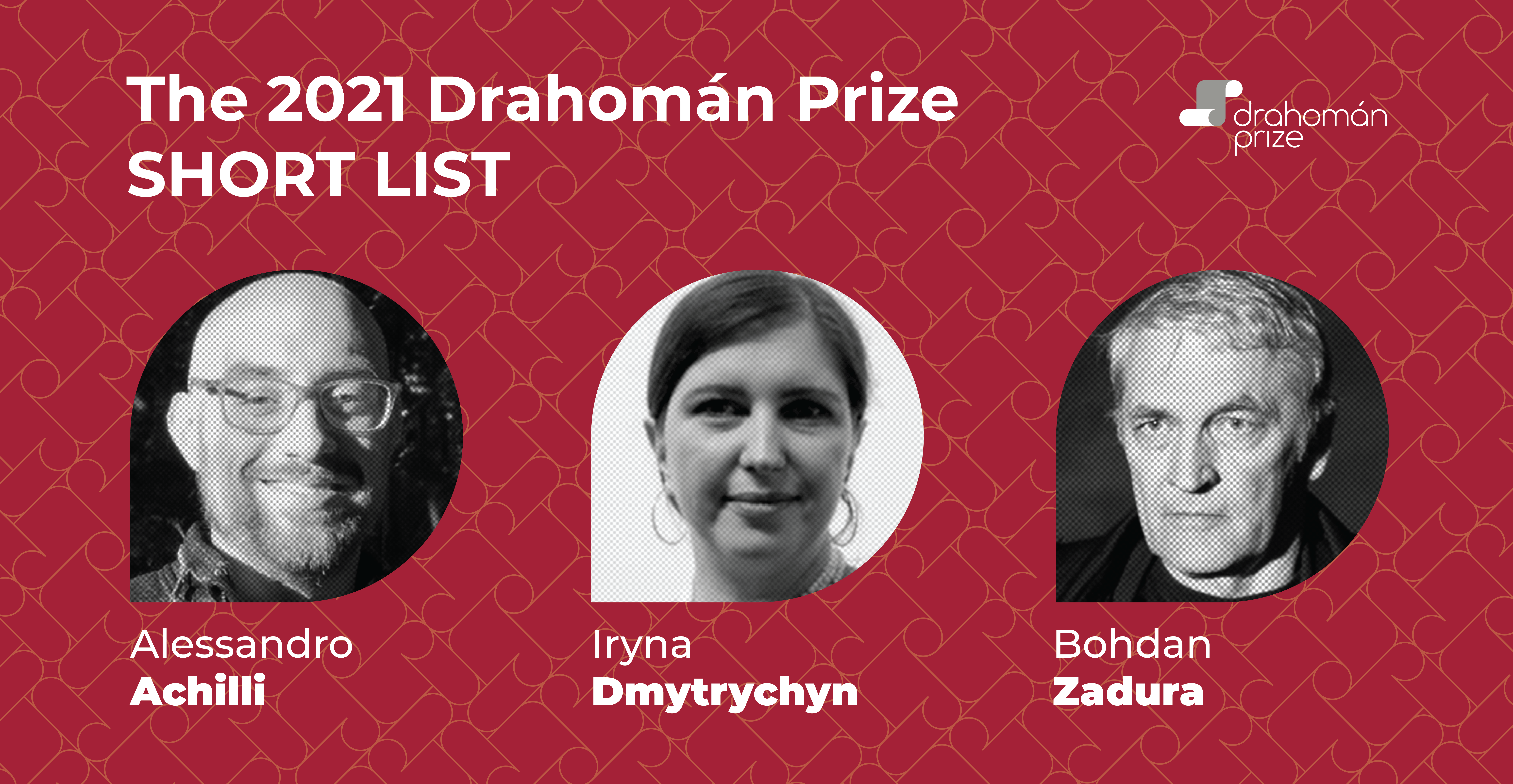 The Chapter of the 2021 Prize included:

The Prize laureate receives a statuette made by a famous Ukrainian sculptor, a monetary reward of 3,000 Euros, as well as additional professional opportunities and opportunities for the promotion of their work.

About the Drahomán Prize for 2020 in more detail

The name of the winner was announced during the awards ceremony held on April 23, 2021, at the Theater on Podil in Kyiv.

The name of the winner was announced by First Deputy Minister of Foreign Affairs of Ukraine Emine Djaparova. Ukraine’s Minister of Culture and Information Policy Oleksandr Tkachenko opened the ceremony. The ceremony was attended by executives of the founding organizations: General Director of the Ukrainian Institute Volodymyr Sheiko, President of PEN Ukraine Andriy Kurkov, and Director of the Ukrainian Book Institute Oleksandra Koval. Since the finalists could not come to Kyiv due to the quarantine, the awards were given to diplomatic representatives of their countries: Ambassador Extraordinary and Plenipotentiary of the Federal Republic of Germany to Ukraine, Anka Feldhusen; Director of the Czech Center in Kyiv, Radka Rubilina; PR Manager at the Polish Institute in Kyiv, Julia Stakhivska.

The Prize laureate received a statuette by Ukrainian artist and sculptor Anna Zvyagintseva and a €2,000 cash prize.

The first laureate is the German translator Claudia Dathe

The first laureate of the Drahomán Prize—an award for translators from the Ukrainian—is the German translator Claudia Dathe. The name of the winner was announced during the awards ceremony held on April 23 at the Theater on Podil in Kyiv.

Claudia Dathe (Germany) is a translator working from Ukrainian into German. She coordinates literary translation projects at the University of Tübingen. Thanks to her, Serhiy Zhadan, Oleksandr Irvanets, Tanja Maljartschuk, Viktor Neborak, Maria Matios, Andriy Kurkov, Natalia Vorozhbyt and many more Ukrainian authors have a German voice. For the Drahomán Prize, she is nominated with translations into German of Serhiy Zhadan’s poetry collection Antenna (Suhrkamp Publishing House) and Oleksiy Chupa’s novel Tales of My Bomb Shelter (Haymon Publishing House).

Within the Drahomán Prize awards ceremony, Imadeddine Raef, a translator from Ukrainian into Arabic, was honored with the Jury’s Special Award “for excellence in translation and promotion of Ukrainian classical literature.” He was nominated for the Drahomán Prize by Ukraine’s Embassy in the Lebanese Republic with translation of Beirut Stories authored by Agatangel Krimsky.

Read more about the Prize and its history in the brochure

Read the brochure
PrevPreviousSix Ukrainian plays will be translated into English and will be presented in the UK
NextIndependent 30: Ukrainian Institute presents a multimedia project dedicated to the 30th anniversary of the Independence of UkraineNext