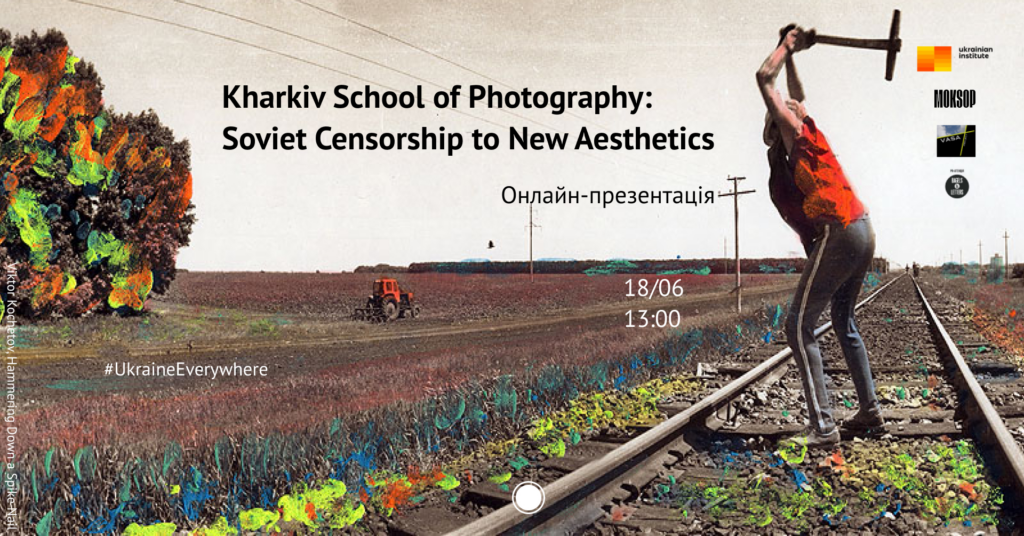 Welcome to the online resource ksp.ui.org.ua “Kharkiv School of Photography: Soviet Censorship to New Aesthetics”, created within the program of the Ukrainian Institute #UkraineEverywhere. It is the largest online archive of the most famous Ukrainian photographic movement – the Kharkiv School of Photography. The website contains a selection of more than 2,000 photographs, 28 artist profiles, and several art groups, as well as photographic studies in the popular social media ‘stories’ format, and researchers’ essays. The site works in English, Ukrainian, and partly in French.

The #UkraineEverywhere program was created by the Ukrainian Institute to present the visual culture of Ukraine online. It reveals the significant achievements of Ukrainian art and demonstrates the interrelationships between Ukrainian and European artistic contexts to the European audience. When cultural interaction is somewhat stagnant at the time of the pandemic due to the impossibility of usual communication, online projects, according to the program partners, become a guarantee that artistic ties will not be completely broken.

The Kharkiv School of Photography (KSP) is an experimental non-conformist art movement that emerged in the late 1960s and early 1970s in Kharkiv, a city in eastern Ukraine (then part of the Soviet Union). The community of Kharkiv photographers created a new visual language that opposed the official Soviet canons and left behind a photographic chronicle that ironically documents and reflects upon various aspects of (post) Soviet life. The KSP artists created an aesthetic alternative in a reality that did not welcome alternatives and used the late Soviet reality as subject matter for their artistic practices.

The contemporary works of the School artists are also reflections on the challenges of time, be it the Russian occupation or art after #Metoo, the consequences of collective historical traumas, the issues of physicality, self-identity, models of relationships, and social hierarchies.

"Whether candid camera shots, staged photos or collages, representations of social processes or reflections on the personal issues, the manner of KSP photographers is mostly ironic and self-ironic," says Igor Manko, the project curator.

The most prominent artist of this movement is Boris (Bob) Mikhailov, a world-renowned photographer, the only one from the post-Soviet territory to be awarded the Hasselblad Prize. Mikhailov, who has been living in Berlin since the late 1990s, is considered one of the first media artists. European critics call him “one of the most important artists to have emerged from the former Soviet Union.” This year, Ukraine finally recognized the importance of Mikhailov’s work – he was awarded the Shevchenko Prize in visual arts, the highest artistic award in the country. Other bright names of the Kharkiv School of Photography include Sergey Bratkov, Viktor and Serhiy Kochetovs, Oleh Malyovany, Evgeniy Pavlov, Misha Pedan, Leonid Pesin, Roman Pyatkovka, Yuriy Rupin, Andriy Avdeyenko, etc. In total, about thirty artists and several art groups belong to this artistic movement. Most researchers split the Kharkiv school into three generations, the third being those who have emerged on the art scene for the last twenty years, since the early 2000s.

"We created the Ukraine Everywhere program to talk about the iconic phenomena and figures of Ukrainian art that speak to the whole world. The Kharkiv School of Photography is undoubtedly such a phenomenon, as evidenced in numerous studies by both Ukrainian and foreign researchers. The issues raised by the ksp.ui.org.ua project, redefining the categories of "beautiful" and "socially acceptable" and the role of art in overcoming the totalitarian mindset, in particular, are no less relevant today than 50 years ago,” says Olexandr Vynogradov, Head of the Ukrainian Institute Visual Arts Department.

The post-Soviet viewer is not always ready to accept the stark visual language of this school, its outright boldness, and the issues it raises (lives of the homeless, outspoken masculine corporeality, dilapidating post-Soviet hospitals, etc.). The school develops the concept of visual “blow” that was conceived in the 1930s by German and Soviet masters of visual art. The historian Bohdan Shumylovych notes that “in this feature of Kharkiv photography researchers often saw the revival of the aesthetics of Dadaism.” Tetiana Pavlova terms KSP “green avant-garde” as opposed to the “red avant-garde” of the 1920s. “If we were to analyze the whole image and style of the Kharkiv photo school (known as ‘brutal’), we would clearly see the green hippie line running through it. Naturalization, or natural instinct behaviors, were the main principles of this period,” she maintains.

The viewer of Kharkiv photographers’ oeuvre will learn not only about the artistic processes but also, say, how the urban environment in Ukraine has developed for the last half-century – from cultural spaces to ordinary everyday life; how the canon of beauty and the masculinity and femininity concepts interpretation transformed in the post-Soviet territory; why, even in modern Ukraine, the body is a metaphor for the boundaries of individuality and personality, a trigger of “public morals”. The non-conformist artists existed under the strict control of the Soviet system, but they managed to wriggle from under and establish contact with European art movements despite the Iron Curtain.

The very term “school” is being debated today, as these associations of Kharkiv photographers were informal. However, it was under this name, the Kharkiv School of Photography, that this movement entered the history of modern Ukrainian visual art.

The project curator is Igor Manko, a second KSP generation artist. Project partners: VASA Project and MOKSOP (the Museum of Kharkiv School of Photography). The project is implemented by Bagels & Letters PR Agency and is part of the Ukrainian Institute #Ukraine Everywhere program for presenting Ukraine’s visual culture online.

The Ukrainian Institute is a public institution affiliated with the Ministry of Foreign Affairs of Ukraine. Its mission is to strengthen Ukraine’s international standing through the means of cultural diplomacy. The Ukrainian Institute facilitates international connections between people and institutions and creates opportunities for Ukraine to interact and cooperate with the world.