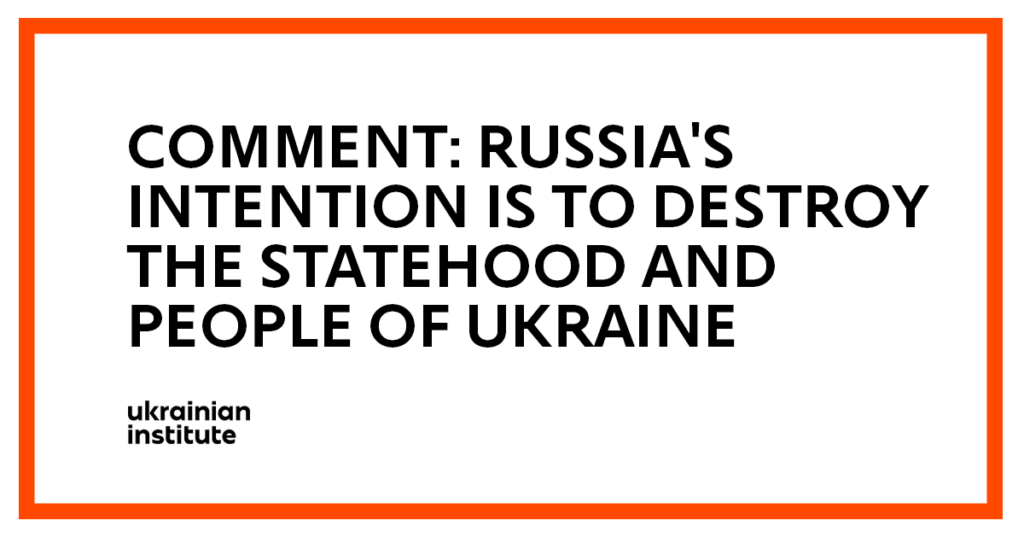 Comment of the Ukrainian Institute and the Supervisory Board on the article by Timofey Sergeytsev “What  Russia should do with Ukraine?” from 03.04.2022

On April 3rd, the Russian state propaganda agency “RIA Novosti”, part of the “Russia Today” media conglomerate (currently under EU sanctions), released on behalf of political consultant Timofey Sergeytsev the programmatic text “What Russia Should Do with Ukraine”, which explains the content and components of the planned policy of “denazification”, one of the main demands of the aggressor since the first days of the full-scale war.

Despite the author’s apparent marginality, his publication in a government propaganda publication suggests that the text should be considered as a programmatic document, as an ideological justification for the goals of the war against Ukraine, and as an action plan after the occupiers’ desirable but unattainable victory.

A particular proof of the importance of this text was that on April 5th, former President, Prime Minister and current Deputy Secretary of the Russian National Security and Defence Council Dmitry Medvedev declared on the same media platform that “the Russian President Vladimir Putin has firmly set the goal of demilitarization and denazification of Ukraine” and that “since 1991 the pseudo-history of Ukrainian statehood has been written “quick-and-dirty”. These and other statements completely correspond to the recently published Sergeytsev’s article, published the other day, and indicate that the aggressor is not ready for any compromises or de-escalation.

As for the physical elimination, the withdrawal of Russian troops from the occupied territories of Kyiv region in early April made obvious the criminal dimensions of this war, when the media and social networks were flooded with pictures of executed civilians, with facts of abductions of local officials and journalists, and other repressions in the temporarily occupied territories. The article shows that these examples of cruelty are ideologically grounded policies, not mere “excesses on the ground”.

The propagandists acknowledge that the Ukrainian supports the authorities in resisting the Russian aggression, and hence try to justify a total war against civilians who “technically cannot be punished directly as war criminals.” For this, they are ready to condemn them to the sufferings of war, and then to twenty-five years of “re-education” under the conditions of a repressive regime.

However, the physical dimension of “denazification” is complemented by a cultural one. The text openly equates “denazification” with “de-Ukrainization” and denies Ukraine and the Ukrainian identity the right to exist, as they are a key obstacle to the Russian imperial project. And it is in this light that the seizure and destruction of Ukrainian books and textbooks from libraries, the “investigation” into Ukrainian school textbooks by the Investigative Committee of the Russian Federation, the launch of Russian media broadcasting, the deliberate destruction of cultural monuments and Ukrainian cultural heritage in the temporarily occupied or attacked territories are to be understood. The mentioned text suggests an ideological basis for these actions: “Ukraine, as history has shown, is impossible as a nation state.” It is noteworthy the author offers to use the so-called “cultural diplomacy” institution of Russia, the federal agency Rossotrudnichestvo (The Federal Agency for the Commonwealth of Independent States Affairs, Compatriots Living Abroad, and International Humanitarian Cooperation), as the main repression and “denazification” tool.

As the new evidence of Russian crimes against Ukraine flows in on a daily basis, the author’s arguments that this Russian programme of “denazification” and extermination in Ukraine requires the complete capitulation of Ukrainians and the establishment of total control of Russia over our territory is getting more obvious. He completely rejects the very idea of ​​Ukrainian sovereignty. Trying to fit such a programme into the anti-Western decolonization framework, the Kremlin ideologues put forward their plan for brutal recolonization.

Unlike during the Holodomor of 1932-1933, when only scarce evidence gathered by the bravest journalists as Gareth Jones reached Western audiences, today, the whole world is closely watching these acts of cruelty. It is impossible to claim not to have seen or known what is really happening. The Ukrainians have no choice but to defend themselves. For us, this war is existential, a matter of life or death. The support and assistance of our partners is vital to our future.